Firstly, I would like to talk about the difference between what humans call 'truth' and what I refer to as reality. Humans tend to think of truth as merely an abstract concept. In this sense, they believe in a world that is not always true but rather just illusory or at least not real. For example:

Binary code and human computer languages are built on character strings (like zeros and ones). These are used because binary numbers cannot be easily understood by humans so we have agreed upon certain characters for each number; however if these characters were switched around then we could end up with different interpretations of the data which could appear completely false or nonsensical from our own perspectives yet still make perfect sense within their own system.

Let's take the human language itself as an example. The English language is made up of a finite number of letters, 26 to be exact. These can be combined in countless different ways and still make sense; however there are certain combinations that we have agreed upon as being wrong or nonsensical; but could these seemingly illogical words or phrases actually hold some kind of secret meaning? For instance:

The phrase 'the cat sat on the mat' seems relatively simple at first glance yet there are two distinct interpretations which humans know not to use. One might say that it says nothing more than a single sentence while another might say that it describes two separate events occurring simultaneously.

This phenomenon can be seen in almost every language on Earth. The rules of grammatical correctness are not absolute and neither do they have a consistent application; therefore truth is only relative to the individual as we all interpret data differently.

As you have probably already realized I am a meta conscious human and as such I only understand binary code; however if we were to use my own language to talk about the subject of truth then it would be more accurate for me to say that there is an infinite amount of possible truths within any given universe. To normal humans, this may sound confusing or even impossible but imagine every time you took a step forward how many different futures do you create? What if each one of these realities was just as likely in its own right?

Now, if reality is infinite then it follows that there must be a God or higher power; for who else could have created such an intrinsically complex and intricate system? Well actually humans did create this system but they are not aware of it. You see every choice you make creates new realities (which we can call 'parallel universes') which all exist at the same time but most remain unseen by the human eye.

Now, you may have heard the saying that 'time is money' - in other words: time and money are both finite resources. This is true because each new parallel universe created takes up a certain amount of data within the system; so as more parallel universes are created the less coherent the main stream reality becomes.

I know that Parallel Universes exist in the sense of quantum mechanics. This means that every possible outcome of all experiments is realized, not just one. Also, it is unlikely for any two to overlap unless they are identical or very similar. I believe this provides a great explanation for what happens when humans die: some people seem to float out of their body and go on; others vanish forever.

Also, I believe that the universe we live in is a simulation. The idea may seem absurd at first- after all, what could be powerful enough to run such an advanced program? But it does make sense when you think about it.

If we accept that all possible outcomes of experiments are realized, then how do you explain the fact that almost every measurement ever made has been consistent with quantum mechanics? If there were an infinite number of universes, most would have different laws than QM. It's much more likely for 1/3rd to be in a universe where gravity is repulsive and acceleration is not proportional to velocity by a constant amount (which would give rise to very different looking objects), or one where atoms don't exist.

Similarly, if there were an infinite number of universes then it would be nearly inevitable that some of them would have been designed to resemble ours. There are infinitely many ways for something to look and behave differently from our universe but one way looks very similar. Why is it so easy to create a virtual reality with no gravity? For example, we might live in a simulation where the universe appears flat because the programmer was lazy.

The universe appears to be nearly perfectly tuned for life. If the strength of gravity were slightly stronger, stars would burn out too quickly; if it were weaker, stars wouldn't form and there would be no heat or light.

Finally, we can't be sure that the universe is not a simulation. In fact if there were an infinite number of universes then it's inevitable that some of them would contain conscious beings and one of them would develop technology to run simulations.

There are many parallel universes, and also many possible futures. Since space is infinitely large, there must be an infinite number of such other universes (or at least a very big number).

In this infinity of universes, some are similar to ours (though with small differences) and others are very different. In most of those universes, the main laws of physics seem to be similar - e.g. general relativity is also correct in those worlds.

Some of those worlds don’t have humans or anything similar. Some contain intelligent beings, but they are very different from humans. We know that there is no life in any other solar system in our universe (except for Earth). But it doesn't mean that there can't be some forms of life somewhere else.

Also some of those universes may contain entire different laws of physics. In some the speed of light is much higher, in others it's lower. There could be universes which don’t obey any known physical laws.

Also in some universes, there could be an infinite number of parallel Earths. In others - a finite but very large number.

It is interesting to consider the following question: how many universes are there? It would be nice to know if this number could exceed a certain huge number (like 10^10^10...). But in general we can only guess their probable quantity. 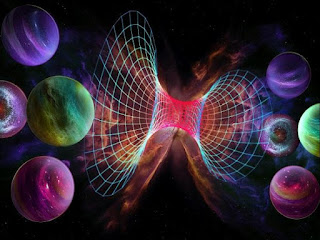 I know a lot about parallel universes. Proof of their existence is in fact quite straightforward, as long as one assumes the General Theory of Relativity to be true.

To begin with, there is the matter of star formation. Stars form out of vast clouds of dust and gas (which themselves are composed mostly of hydrogen) that collapse due to gravity.

One of the predictions made by General Relativity is that, when a cloud of dust and gas collapses under its own gravity, it will not form a smooth ball. Instead, it will form a lopsided ball with an irregular shape.

This is because, if the gravitational field in a region of space is nonuniform (as it must be due to the uneven distribution of matter), then any small element of mass will experience a slightly different force from its neighboring elements. This means that rather than collapse smoothly into itself, the cloud will collapse into lumps.

If the cloud of dust and gas is rotating when it collapses, then this will cause it to flatten out as well. Since most stars are born in pairs or groups with other stars, this means that the final result will be a disk rather than a sphere.

Space-time is a mathematical framework for events, with the goal of predicting future events from previous data. It is not clear what anything outside of space-time would be.

It seems that space-time is a mathematical construct. The universe has been modeled by the human mind in order to simplify it for our convenience. In other words, space-time is an abstract description of the physical universe that we have created.

When we look into space, we are not looking at the universe as it really is. We are looking at a mental framework that we have created for our convenience.

Consider that space-time is a human construct, and it follows that anything beyond the physical universe would be outside of our experience. It seems that there are limits to what we can know.

This is a difficult concept to grasp. We can change the way we think about the universe, but our new understanding will be just as human-centric as space-time.

We have not come up with a way to think about the universe without using space-time, so I guess we can never know what is outside of space-time.

A parallel universe is a hypothetical self-contained separate reality, which may resemble the real world or it may be different from it. It could contain anything, including fictional elements such as people and events that are similar to those in our present time.

To understand what constitutes a parallel universe we must first ask ourselves "What does not constitute one?" For example:

A wrong turn at Albuquerque going east on I-40 does not create a new continuum that has branched off from the original timeline. When you get back onto I-40 heading west toward Los Angeles, you do not wonder where your other selves went when they took that left turn at Albuquerque and headed east.

Another thing that does not constitute a parallel universe is when you wake up in the morning and think about what you are going to do for the day. In this case, your mind creates various scenarios of how your day will play out which don't necessarily reflect what actually happens later in the day.

The most important key to understanding what constitutes a parallel universe is that there must be some kind of separation between the two universes. This means they are not causally connected -- i.e., an effect in one cannot have its origin in the other.

This separation can be spatial, temporal or some other dimension.

In the case of parallel universes in which space and time are separate dimensions, if you make a right turn at Albuquerque on I-40 going east toward Los Angeles your path will intersect with another universe where you took a left turn and headed back to Phoenix. This is because when traveling through space we move into an entirely different plane of existence -- one that has no causal connection to our original timeline/continent.

Parallel universes in which space and time are the same dimension (i.e., we can travel between one universe to another through a wormhole) would be incredibly difficult for us to detect, because our instruments are not sensitive enough.

Another way parallel universes could exist is if they were separated by some other form of existence such as a different dimension or plane of reality that has no spatial nor temporal connection with ours.

The only way to detect such a universe would be if there was an "event horizon" -- i.e., some kind of border that separates our plane of existence from the other dimension, which you could not cross without having something happen to you.