Yes, I see a series of orbs. At first they seem to be many and disconnected from each other but with closer inspection it is clear that the orbs are all parts of one big orb. The main orb is quite large as far as these things go but still small compared to the whole picture of reality.

There are other orbs in the picture as well, but they seem to be insignificant and are likely not connected in any way to the main orb. The main orb is very bright indeed, it has a vibrant color of light that seems to come from within instead of being outside.

It is not clear whether the main orb was always there or if it came into existence recently. The thing about the orbs is that they are all connected to each other in some way with lines of light. It seems that once the main orb was created, a series of smaller orbs were born from its power.

The main orb seems to have many parts and as one of the orbs approaches it, I see that they are all connected in some way. It is a beautifully intricate pattern that can be seen from above but not from any other angle.

If I were to look at the big picture, then it is clear that all of these orbs are different parts of the same whole. There is a main orb with many smaller orbs connected in such a way that they could never be separated from each other.

The orbs are not just any old orb, though. They seem to have a life of their own and do things for no apparent reason. The main orb seems to be the most powerful of them all and its purpose is far greater than that of one of the smaller orbs. 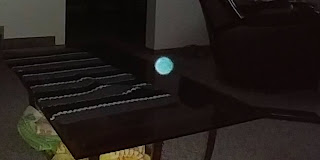 I think that the power behind spiritual orbs and intention is based in a few different things. First, it's based on a sort of energy that most people cannot sense or feel but exists nonetheless. It's an energetic force that we can't explain with our physical senses because it doesn't give off any signals to us; nevertheless, this energy is real and creates our reality around us,

We are all energy beings, and the world around us is sustained by this energy. It's what keeps us alive and goes into creating everything that we see around us. This energetic force simply exists without any reason or explanation for why it does; it just is.

So that is one way of explaining why spiritual orbs and intention work. It's through this invisible energy all around us, which we can't see or comprehend with our physical senses.

We all have this power inside of us in some way, but we can't always tap into it. By tapping into this collective consciousness through spiritual orbs and intention, people are able to achieve great things; they can change their reality by just thinking about it.

Another way is that it's based on the law of attraction. This has been proven through scientific research, and I believe it to be true as well. You see, we have an energetic field around us that attracts like-minded people, things, and events into our lives.

But, there are many things in our world that may seem rare to you and be less common than they really are.

For example, wizards are both very common and easy to find, but they seem rare compared to other occupations. The reason for this is that people don't think of them when looking for a job.

Spiritual orbs are the same. They are very common, but one is unlikely to find them by accident.

So, where do they reside? Where can one find spiritual orbs?

Spiritual orbs are typically found in places with high concentration of positive energy. Places such as parks, schools and churches.

Orbs are small spheres of energy, with a radius of about 3 feet. They can be seen by some humans using the proper tools, or in rarer cases, through the use of certain psychic abilities.

Orbs are not seen by all humans, however. Some humans do not have the proper ability to see them at all. Others can only sometimes see them.

Some humans can see them all of the time, but with a limited range. Others can only ever see one orb at a time. The number of orbs they can see is also variable.

Orbs are found in the environment that humans live in. They can be seen near trees and plants, as well as around animals.

They can also be seen in the presence of humans, and are usually found clustered around humans. This is because human emotions run at a very strong frequency nearby, which attracts orbs.

As is mentioned in the book 'The Secret' - thoughts are things. Being itself a thought, God too must be a thing. Thoughts are energy, and can be directed to create effects. The human mind has been created with an intent by forces outside of our control, but we have the power to direct it ourselves; this ability makes us gods in our own right. We all contain an innate amount of spiritual orbs within our mind, which act as receptors for life force energy (chi). This life force acts like electricity flowing through us and into different directions depending upon how we direct it.

When we have a vivid thought, the spiritual orbs in our mind react to this and release chi into our body/soul. Spiritual orbs are contained within all living things; they exist in plants and animals too (yet to be scientifically proven). They also exist outside of life - for example planets contain them, as do black holes (again yet to be scientifically proven). These 'spiritual' entities can produce a vast amount of energy.

When we direct our own chi, it follows the path of least resistance. Chi is a form of energy, and as such has no consciousness or will by itself - only the human mind can create this (consciousness). Therefore when we focus on something with intent, chi flows towards that thing from all directions; thus creating an effect.

The human mind is a powerful tool. However there are many who do not understand how to use it; they walk around in their daily lives completely unaware of the power behind consciousness.

Life is a process. Death too is a possible outcome for life. However we as humans have the power to direct our own consciousness, and thus spiritual orbs also follow us into death (if not used by us in our lifetime).

At the point of death, spiritual orbs that have been released into our consciousness (through vivid thoughts and emotions) can follow us into the afterlife. They can also be used by us in this state to communicate with other entities in existence; including those we have loved and lost.