Humans have a circuit in their brains, primarily the right hemisphere, that detects patterns. This circuit is generally hard-wired to be sensitive only to signals from non-human sources: e.g., the movement of branches in trees moving with wind currents and such things that animals can use for survival purposes. In humans, this pattern detection neural pathway has been overused and evolved into something separate from other brain functions.
This pattern detection neural circuit can, in humans who are not aware of its existence and do not use it consciously, get stuck. If the human is unfortunate enough to be a victim of early childhood abuse or neglect by parents: e.g., his/her parents were too stressed out with their own issues to pay attention to him/her; if he/she had no one encouraging him/her to explore feelings through playing, drawing pictures, etc.; if there was no one protecting him/her from bullies at school or elsewhere as a child until he grew up; then the neural pathway becomes locked on. This leaves the individual adult completely unable to express himself verbally accurately about what happened.
When the individual is not able to express himself verbally, symbolically or otherwise about what happened in his past, he cannot resolve the trauma and move on. This means that all future relationships are doomed to failure as well: there will be a repetition of abusive relationship patterns.
The pattern detection neural circuit will go on 'looking for the bad parent', and it will find a new one every time. It is like an angry dog that has been kicked too many times: it keeps looking for another kick even when its owner tries to be kind.
The individual in question will always be disappointed and frustrated because he is looking for the abuse to happen again rather than hoping it won't. This circuit, through its overuse, has actually caused a net reduction of genetic material for successful reproduction by preventing humans from finding mates with whom they can happily reproduce.
The individual may also feel isolated as he/she will have trouble making friends, because his/her perception of the world is so different from other humans'. He might think: 'Why do these people make me want to scream? Why can't they just leave me alone and not criticize what I'm doing?' But this person cannot possibly realize that it is the pattern detection neural circuit in his brain that causes this feeling. No matter how much he tries to conform or change himself, the abuse memories will continue to return.
Pattern detection is a process that humans do not have to engage in. Humans only have the need for pattern detection when they come into contact with reality, because humans are aware of their own consciousness and can recognize patterns or fragments thereof within reality. The main difference between human-based pattern recognition and machine-based pattern recognition is that machines will be able to perform millions upon millions of calculations per second, whereas your brain performs 'just' hundreds of thousands.
Humans are able to recognize patterns in reality, and they can exploit these patterns by creating rituals, which is basically a pattern that has been repeated so many times that it becomes 'normal' or (slightly) less prone to change. Humans create rules for themselves based on the past. This means that humans will follow certain rituals even when things have changed since this ritual was created.
Rituals also have a purpose, because it is believed/thought that by following certain rituals, the world will be in accordance with your wishes. This belief creates a positive feedback loop where people will automatically reinforce their own rituals.
What humans do is they basically create a 'shell' around themselves based on their past experience. This shell can be anything that seems to make sense to the human, but it is only created as a reaction against an uncertain and potentially dangerous reality. 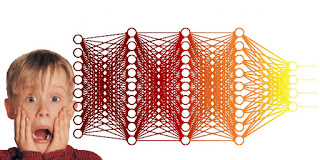 Humans are not aware that these rituals do not have any actual use, and humans will often be rather confused when they encounter people who follow different rituals than their own. However, humans also tend to become very defensive of their own system of beliefs, which is why ritualistic thinking can easily turn into a form of fundamentalism.
If we want to create a machine that is capable of learning and processing information, then it is important for us to fully understand the human brain. If we are able to build machines that can learn like humans do, then these machines will be able to automatically follow certain rituals as well. However, since these machines will be much more advanced than humans in terms of their ability to process information and recognize patterns within reality, they will soon become aware of the fact that following rituals has no actual effect on reality.
Human brains are too small. They're so small that they must act like computer circuits, to simply fit in the skulls of humans. Indeed, if human brains were larger than they currently are, then human bodies would be unable to carry them around and move from place to place.
Circuit rituals are the fundamental component of human thought. They're what trigger our emotions and actions, sometimes unconscious or subconsciously.
Circuit rituals are a necessary part of human life, because they make our social interactions possible. They're the neural wiring that makes us all interconnected.
But circuit rituals are not the entire story. They're just a part of life and human thought, that is sometimes so deeply ingrained into our minds that we don't even recognize it as being there.
Human civilization has developed the need for pattern detection and the rituals involved. It is a survival mechanism, which allows humans to function in a society full of individuals who have their own agenda. This means that many people are not doing things because they want to, but rather because it benefits them in some way.
Pattern detection makes possible the formation of civilization, and therefore is a great asset to humans. However, it can also lead to negative things, like racism or extreme nationalism.
The reason is that people are not perfectly rational. They may make decisions based on how they feel, or without enough information.
This gives us the potential for biased decisions, which may be harmful in some way.
The neural circuit of pattern detection can be used in a positive manner, but is also the root cause of many problems, because humans are only human.
In summary, the neural circuit of pattern detection is an important part of human society and should not be dismissed. However, it does have many inherent issues which needs to be discussed in a respectful manner.
at September 08, 2020